A bowl, a plate, a conversation 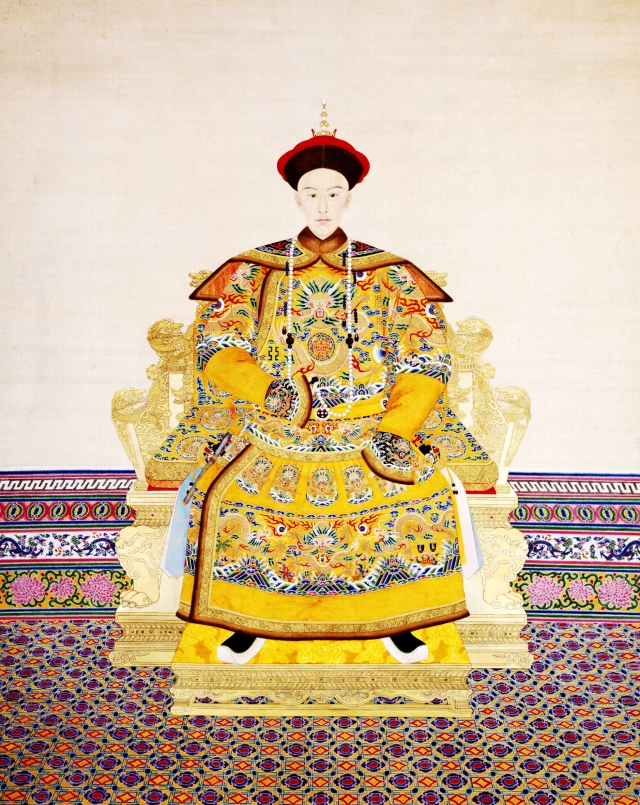 Emperor Guangxu the tenth emperor of the Manchu Qing dynasty

Viewing the local antique sale my attention was captured by a Chinese bowl decorated with two red dragons and with a distinctive disk of gold in the centre. What initially caught my eye was the auction house’s accidental arrangement of this piece on a smart nineteenth century mahogany extending dining table of good quality. Together the two seemed a classy couple compared with some of the fairly ordinary flotsam and jetsam that populate antique sales in this neck of the woods.

I decided to attend the auction.

Slightly annoyed at not getting a couple of things I thought I wanted early in the sale, I decided not to be outbid on the bowl and vanquished both an absentee bidder and a opponent in the room – at some cost. I waited around to see the table go under the hammer – but sadly it went elsewhere and the pretty pair, bowl and table, were separated.

I fled, lest I frittered money on unnecessary items.

When I got the bowl home I gave it a gentle wash and looked it over carefully. Despite a little loss to the gilding around the rim it seemed in great condition. But was it old? I’d bought it because it looked splendid not because I know anything about Chinese ceramics. This has been the general approach to the purchase of both Chinese and Japanese pieces here – it is a subject on which I am not expert but I do find myself attracted to the output of both nations. 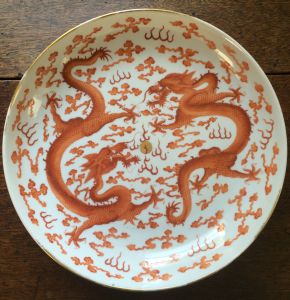 I was pleased then, to locate a matching bowl for sale on an online antique site, where it was described as a “Chinese Qing dynasty period bowl having iron red dragons.” The description then went on to note the piece had “the red six character calligraphy Guangxu (1875-1908) reign marks.” The auction house provided an estimate that made me less worried about my purchase price.

Reign marks are a fairly new territory for me. So I was pleased to also match those on my bowl to Guangxu who ruled China between 1875 and 1908. Guangxu came to the throne aged four in 1875 as the tenth emperor of the Manchu Qing dynasty. He was adopted by the ruthless one-time concubine Empress Dowager Cixi, who “aided” his rule. This arrangement didn’t turn out well and in 1895 Cixi, placed Guangxu under house arrest until she worked out a way to discreetly poison him.

So my red Chinese bowl is from this volatile period of Chinese rule in the late Nineteenth century.

I’d shown a friend a photo of the bowl the night previously after he had enquired as to whether I was pursuing anything at the sale the next day. He remarked that it ‘went’ with two plates I already owned. This is a pretty astute observation when you realize how many plates there really are here.

The plates in question are by the English maker Minton and date from the middle of the 1880s. So potentially the English plates and the Chinese bowl are contemporaries. The British makers may have been looking a little more to Japan for their decorative inspiration but in terms of colour they’re spot on. It was clear that there needed to be a conversation between our Chinese bowl and our Japanese inspired English plates.

I selected the prime position on the library mantelpiece on which a marble lion has remained undisturbed from the very first posting on this blog. However when it comes down to it, the library is a great room for really looking at objects, so it seemed a fitting location. Accompanied with two Japanese blue and white vases and a pair of Imari style candlesticks (both yet to be properly identified), the Chinese bowl deservedly takes centre stage.

The ebonized aesthetic movement over mantle makes a great replacement backdrop for the regency style table at the auction house and the orange-red chinese plate seems at home.

2 Responses to A bowl, a plate, a conversation