The other day while viewing an art sale, for someone else, I had noticed (and immediately fallen for), a rather splendid Victorian painting, The Rape of the Sabine Women, attributed to the Irish painter Daniel Maclise.

Daniel Maclise (1806-1870) is best known for the murals in the Palace of Westminster depicting The Death of Nelson and The Meeting of Wellington and Blücher at Waterloo (1864). He was a favourite painter of Prince Albert and a close friend of Charles Dickens. A Daniel Maclise, of any sort, is a rare thing on the New Zealand art market.

The Rape of the Sabine Women was a watercolour (laid down onto linen) of remarkably good colour and excellent execution and it was presented in an impressive gilt frame. The estimate on the work was well above what I could afford, but I held out hopes that with divine intervention it might fall my way.

I took a few digital snaps and headed home to report back to the friends for whom I’d attended the auction viewing. I continued to think about the work. Perhaps I could afford it? It was after all, splendid and although the subject matter wasn’t quite ‘us’ it would make good company for a little oil sketch by Maclise that hangs in our library. Except that is, that some things about this work worried me. If I was going to spend serious money I determined I’d better do some serious research.

Firstly I didn’t really feel this was a Maclise. Maclise’s approach to figures is quite distinctive and so I checked in Peter Murray’s book ‘Daniel Maclise: Romancing the Past.’ The book refreshed my eye and the figures at the centre of the image did not fit the bill. It also made no mention of their being a Sabine Women attributed to the artist. I felt sure this wasn’t a Maclise (later I found out that experts from Auckland Art Gallery, and Christies who viewed the work came to the same conclusion) but I liked the work even more the more closely I looked at it.

“Maclise’s figures, are quite distinctive.” Daniel Maclise, The Wrestling Scene in ‘As You Like It’ (Image courtesy Christie’s Images Ltd., 2012.)

Then there was the subject itself. The picture contains only one woman. So it could hardly be The Rape of the Sabine Women, plural. Artists are seldom that sloppy, even given ‘artistic license.’ Also that subject was in itself not popular with the Victorians who were after all a little more prudish than the generations prior – well at least when it came to scenes to be hung on the dining room wall. So if it didn’t depict The Rape of the Sabine Women what exactly was going on?

I went back to the image.

A knight dressed in red is rescuing a woman captured by brigands who was until then seemingly about to be set alight. It seemed we were in popular early 19th century territory – medieval knights rescuing maidens in distress. Perhaps it was from Sir Walter Scott? So into Google I went with an image search for ‘knight rescuing maiden.’

It took a while, trawling through abysmally sentimental images of the Disney meets Game of Thrones kind, but eventually there is was, the painting in question or at least what was left of it.

The work was by William Hilton the Younger (1786–1839) and called Sir Calepine Rescuing Serena (1830) and depicts a scene from Edmund Spenser’s ‘Faerie Queene.’ The painting is in the Tate gallery, however you won’t see it hanging there anytime soon as the painting is almost entirely destroyed by the asphaltum the artist used. This means that, like so may of this other works, this painting suffers from an irreversible creeping blackness.

So if this was a watercolour in preparation for a now lost work by William Hilton that was even better than it being a Maclise. Was this the sort of a work that might have turned up in New Zealand? The auctioneer, when chatting to me, had revealed that the work was from a deceased estate that had ‘some good art.’ This might be worth buying – even without relying on divine intervention.

The Tate website had another Hilton image. In 1989, probably realizing that their large Sir Calepine was doomed, they had purchased a small preparatory watercolour for the work. This illustrated Hilton working with small spontaneous studies. Did he then work these up into meticulously watercolours? It seemed a bit doubtful to me. Watercolours of the finished kind tended to sit in quite a different artistic camp. Clearly more research was required. 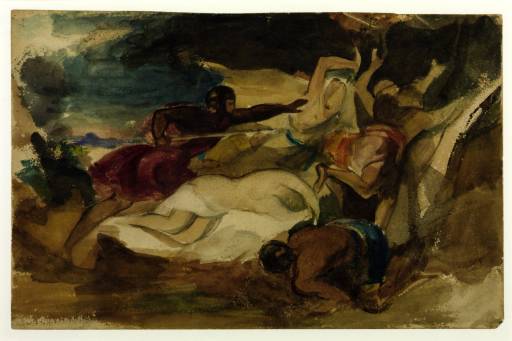 I returned to my digital images, one of which was of the frame maker’s label attached to the back of the frame. This work was largely undisturbed it had no real signs of having been repeatedly taken out of its frame. However the label had been gnawed away leaving only vestigial information.

There was the name ‘Alfred Boot Princ … Eastcheap, E.C, & Dockhead, S E.’ and between that and the remains of a title the words ‘Manufactory on the Premises.’ Having grown up in a colonial part of the world in which almost every second street is called Princess Street it seemed obvious that Alfred Boot lived and worked in Princess Street. However Google told me that Alfred Booth was no frame maker but instead a printer. On second viewing the label read Alfred Boot Printer, Eastcheap, E.C, & Dockhead, S E. This explained ‘manufactory on the premises.’ This was not a watercolour but a print.

The print had been laid done onto linen which was a common practice for early chromolithographers and then applied to a stretcher – so it was an easy mistake to think it was a watercolour. A printer’s label attached directly to the rear of a print in assailable evidence you’re not looking at an original work and certainly not a watercolour.

I was now in a strange position of having undertaken extensive and, I thought conclusive, research that I suspected the auctioneer might want to know – but would he? I took some solace in my ability to deliver the first half of the information to him – the proper name and title. Nervous though I was, the news was taken very well and an announcement was made when the lot came up listing the real title and artist and its likely designation as a print. There was of little or no interest in the room and the work remained unsold.

It’s kind of a sad end to the story because they work still retained the same splendid appearance it did when I first saw it. The work was beautifully presented and would have been expensive in its day. Early Nineteenth century Chromolithography is a marvellous thing – but I suppose none of us are quite there yet. But even now I can’t help but think that this was Victorian image making of the best sort and that Sir Calepine and Serena would make splendid décor item in any home.