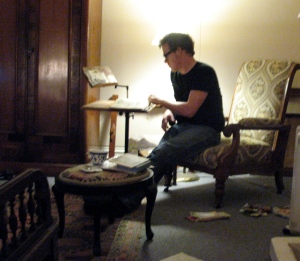 Douglas Lloyd-Jenkins is a writer, broadcaster and former museum director.

He is author of a number of books and is well known to New Zealanders through his design and architecture columns in magazines such as NZ Home and the New Zealand Listener.

Wallpaper magazine described Douglas Lloyd Jenkins as “one of the most influential design writers in the Southern Hemisphere.”

He was the brains behind, and the face in front of, TVNZ’s Big Art Trip, which since its two seasons (2003 and 2004) has proved to be New Zealand’s most popular and most repeated television arts programme. Another documentary series New Zealand At Home was written and presented by Douglas Lloyd Jenkins based on his award winning book, At Home: A Century of New Zealand Design and screened initially in 2006.

In 2005 Douglas Lloyd Jenkins was awarded the Montana Medal for Non Fiction for his book At Home: A Century of New Zealand Design.

Douglas Lloyd Jenkins has a high profile as a curator with a long list of gallery and museum shows, many of which reintroduced pioneers of New Zealand design who had been overlooked. These included The 1950s Show, The Textiles of Ilse von Randow, Mason Handprints, Avis Higgs: Joie de Vivre and Frank Carpay Crown Lynn and Beyond.

In 2006 Douglas Lloyd Jenkins left teaching to take up an appointment as Director of the Hawke’s Bay Museum & Art Gallery, Napier. Over the next three years he has transformed what was a sleepy regional gallery into an innovative centre of excellence, assembling a team that has established Hawke’s Bay Museum & Art Gallery as one of the best and most closely watched museums in the country.

In September 2013 the museum reopened following a $18 million redevelopment now named MTG Hawke’s Bay (www.mtghawkesbay.com) acclaimed as ‘smart, sharp and sassy’ and ‘as a place of style and taste.’ For a profile of Douglas lloyd Jenkins as Director MTG see:  http://www.stuff.co.nz/entertainment/arts/9373230/The-treasure-hunter

In 2008 Douglas Lloyd Jenkins was awarded the Member of New Zealand Order of Merit in recognition for his Contribution to Design. In 2009 the New Zealand Institute of Architects award him the Presidents Award for contribution to Architecture.

Douglas has been a collector of decorative art since an early age and has renovated and decorated a number of homes. In 2014 he left the museum world in order to write full time

Peter Wells is a writer of fiction and nonfiction, and a writer/director in film. His fiction looks at a world of secrets, identity, subterfuge and illusion, frequently using the lens of a gay narrator. His first book, Dangerous Desires, won the Reed Fiction Award, the NZ Book Award, and PEN Best New Book in Prose in 1992.

His memoir Long Loop Home won the 2002 Montana NZ Book Award for Biography, and he has won many awards for his work as a film director.

He is co-founder of the Auckland Writers and Readers Festival which is now New Zealand’s leading book festival. Peter Wells is also a passionate cat lover and put together an anthology of New Zealand writers talking about cats in poetry, memoir and fiction.

A passionate conservationist, he made two highly influential documentaries, one The Newest City on the Globe, on Art Deco Napier when the small city was contemplating destroying its architectural heritage and the other The Mighty Civic, the story of  a flamboyant picture palace (the Civic, Auckland) which was at risk of destruction. Today, both city and picture palace are fully restored and much loved icons.

In 1993 Peter Wells co-wrote and co-directed Desperate Remedies, a high camp theatrical feature film which was described as ‘Jane Austen on acid.’

In 2006, Wells was made a Member of the New Zealand Order of Merit for services to literature and film.

Peter Wells also writes a blog (www.peterwellsblog.com) in which he muses about New Zealand history and the creation of his book on the 19th century intellectual maverick and dissident, William Colenso – published as The Hungry Heart: Journeys with William Colenso  in 2011.

4 Responses to About the authors