The hang of the completed hallway was scheduled for Queen’s birthday weekend (first weekend in June). We’ve have lived for a while with the hallway looking spare and now time had come to get our heads around the complexities of hanging detail which, despite anxieties, went really rather smoothly.

The hallway essentially completes the building aspect of the house. When we arrived almost 10 years ago the house was in three flats and the division was nowhere more obvious than in the hallway, which had been chopped into parts. Part of it had leaked rather severely due to a rusted internal gutter and because it was a hallway tenants, (and initially we too) simply resorted to buckets in heavy rain. This left horribly stained wall linings and even once they went horribly stained ceilings.

Then for a long while – once the entire house was ours – again we had an immensely long hallway that despite different hangings and arrangements of furniture just looked sad and dingy. You can convince yourself otherwise for a moment or two but nothing compares to a freshly lined and painted hallway.

At the end of the Entrance Hall the ‘unidentified colonial gentleman stands guard. To the right are included works by Samuel Prout and John Absolon.

So hanging the hallway has brought these two aspects of life into sync. Little paintings it turns out are great for confined spaces and work well in groups. There was a bit of a cull but in large part most have gone up with plenty of room for growth – albeit with a little more of an eye to size and space considerations.

That means we now have a display space for the William Gilpin, Joseph Absolon, Richard Parkes Bonington and the Frank Hol all, or most of, which have featured in their own blog posts but have generally lingered at the back of closets for the last couple of years. A key place has gone to the marble bust of the still unidentified colonial gentleman (https://decorextremus.com/2011/05/20/an-old-colonial-wanders-in/) who featured in a 2011 post when he first arrived. He now takes up a position at the end of the main entrance hall from where he glances down the next hallway.

The result is even better than we were expecting and makes what was a dreary hall and all together more elegant space in which it is worthwhile lingering. 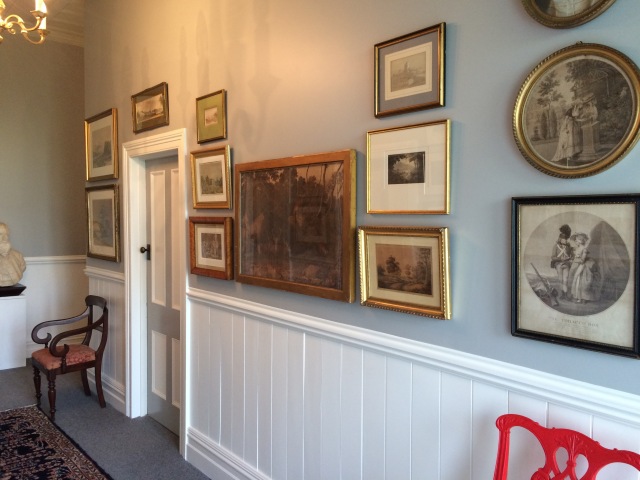 This entry was posted in art, collecting, practical matters. Bookmark the permalink.