We spotted this work in a sale. For me at least, the initial viewing was a bit of blur, as I’d left my glasses behind. I could determine outlines of large pieces of furniture and the distinctive shape of a large soup tureen, but the fine details on the surface of an image were beyond me. However as this work was large enough to ‘feel good’ even under those circumstances, I asked Peter to read the signature. This was sufficiently large and clear to reveal the name  ‘Alfred East.’

That name rang a distant bell. Wasn’t that was the name on the little painting that hangs in the library? I was sure that was by Alfred East.

Peter had spotted this earlier work in a Webb’s sale a while back. ‘The Silence of Morning’ (1897) is a lovely depiction of a man in a rowing boat on a tree-lined river. Part of the attraction is that it had an undisturbed backing – featuring the label of J W Gibb, the late nineteenth century art dealer of 109 Cashel Street Christchurch, son of the Scottish maritime painter John Gibb (1831-1909).  The East was however very small and therefore broke the self-imposed ‘no small paintings’ rule. Why this one was allowed ‘in’ was that it passed an altogether different test.

Sir Alfred East is one of the artists represented in the Andrew McIntosh Patrick collection. I have mentioned before that this man can do no wrong when it comes to issues of taste. 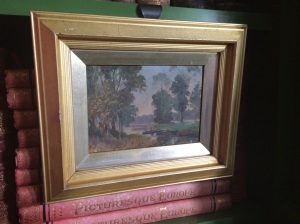 He and I intersected a while back through the pages of World of Interiors and then through a copy of his Fine Arts Society sale catalogue acquired online.  I’ve been collecting earlier works (Gilpin, Absolon, Taverner etc), but Andrew McIntosh Patrick does a very good line in late nineteenth century/early twentieth century English and Scottish works. That combined with an excellent little book on artists associated with Oscar Wilde (The Wilde Years: Oscar Wilde & the Art of His Time) provide valuable references for this particular aspect of the collection.

Andrew McIntosh Patrick had a lovely little Alfred East called ‘New Moon and Rain Showers’ that dated from a trip made to Japan made in 1889. East spent 6 months in Japan and the subsequent exhibition of works in London caused a sensation in its day and propelled the artist into the spotlight. After that Alfred East’s career was a common enough tale of the alternative artist who becomes an establishment figure, eventually elected President of the Society of British Artists and in receipt of a knighthood from Edward VII.

Establishment British artists aren’t much admired or sought after in New Zealand any longer. It is a type of reverse colonial cringe. Something can’t be good or interesting because it is/was British. It a very limiting point of view but being ‘English’ puts a lot of art outside the interests of New Zealanders, English artists with knighthoods even more so. So generally Sir Alfred East, Sir Frank Brangwyn, Sir George Clausen etc., all once much sought after early twentieth century names have tumbled into that ever-expanding pool of overlooked and neglected artists.

I visited the sale viewing later that day with my glasses and determined that the moldiness was on the glass rather than the work and later sat through 400 lots for the pleasure of acquiring it. The auctioneer described the work as ‘interesting and European’ (anything but British) and knocked it down to me for $25 with no other interest on the floor.

Alfred East was born in Ketteridge, Northampton in 1844 but studied at the Glasgow School of Art (wise decision) and later the Ecole des Beaux-Arts in Paris. He became part of what was considered a new modern British school of landscape artists. That reputation for modernity was much stimulated by the Fine Arts Society exhibition of works completed in Japan. After that he settled into warm lyrical landscapes of pleasing colour and rhythm of line. He was once described as ‘ the most significant figure in English landscape painting in the decades before the First World War’ and positioned ‘in the direct line of Constable and Turner.’ How times change.

The etching titled Stow-on-the-Wold (1906) has all of the characteristics of the artist’s work and once illustrated a Studio magazine feature called ‘The Etchings of Alfred East,’ written by Frank Newbolt which he opened like this,

“When the Director of a Continental Gallery bought a copy of an etching by Mr. Alfred East called Stow-on-the-Wold, he recognised a new force in the limited field of that art; a new planet swam into his ken, and, like other watchers of the skies in this country, he was impressed by it.”

People no longer quite write about art like that, nor does it seem that the watchers of the sky in this country are keeping much of an eye out for Alfred East etchings. However Stow-on-the-Wold is a pleasing work that is sure to find a safe place on the wall here until the taste changes and it once more venturers out into the limelight.

This entry was posted in collecting and tagged Alfred East, Andrew McIntosh Patrick, Fine Arts Society, Stow on the Wold. Bookmark the permalink.

2 Responses to An Easterly Trajectory