Readers of this blog might well be lead to the conclusion that there is something bargain-led about the décor selections here – particularly as buying things cheap at auction is a reoccurring theme. However although we might be a little Shabby Chic (I prefer the Claire Regnault-coined Shabby Baronial) – some items, even auction finds, are the result of strong-willed tussles on the auction floor – and aren’t bargains at all.

This week I spotted a large candelabra in Maidens & Foster antique sale – this sale wasn’t the most engrossing sale and I was in danger of having nothing to bid-on. The usual obscure art works were missing – there was a faded Howarth but little else. There were no carpets, nor tempting chairs and no eclectic china or glass.

The candelabra occupied a prime place on a table but the general gloom of the sale had led me to suspect it of being a later reproduction. A good candelabra is made of a number of pieces and comparitively few large ones remain intact. Modern versions are generally made in one piece – but they seldom have any real height. So I moved in for a closer look.

Auction viewings are strange things because you don’t know who else is looking or who else is looking at you looking. Years ago, at an art auction, I was out bid on a painting by someone who then had the nerve to come up to me and ask ‘what did I just buy?

So I was a little wary of seeming to be looking too closely at the candelabra but for a closer distance it did seem legitimately old. I took a quick cell phone pix and moved on. That night it was revealed that Peter had seen it – but also suspected it might be a later Walker & Hall number or even worse Rodd (or Community Plate) – the lowest of low electroplated silver brands. 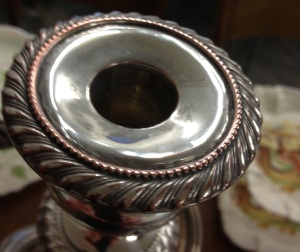 The cellphone picture taken too quickly proved generally useless but did reveal one interesting fact – where the silver had worn away on one of the sconces – copper was showing through. This is generally a sign of age.

Sheffield plate and early electroplated silvers were on copper but it was soon abandoned for cheaper base metals.  I thought about it over night – not that I quite admit to lying awake thinking about candelabra – but close. I recalled the little cluster of leaves hanging below the two outer branches and thought how they were just the sort of detail that would have been eliminated in a later copy and of the heavy turning at the base – nothing very ‘modern machinery’ about its uneven foot print.

The next morning I paid another visit to the pre sale viewing – only to find the object of my desire in the hands of a – KNOWN ANTIQUE DEALER.  To be fair he’s one of the nicer dealers, a slight round grey-to-early Englishman, who does have  good taste and buys in a discerning way. I thought that I couldn’t be too far off in my guesses if he was giving it a close-up once over. At the same time I wasn’t going to be spied looking at it myself, not with him in the room.

I had determined from the auctioneer that there were ‘no expectations,’ that is the vendor hadn’t picked the candelabra out for the special attention of a reserve price. I placed an absentee bid. These usually have to be higher than your usual bid  – as it is the price you pay for not being at the sale and then  I left things to fate.

Except that is, I ended up driving past the auction at lunchtime. About the right time for the lot to be coming up. I decided to pop in. Really to make sure the auctioneer did the right thing by my absentee.

The room was full and when after five minutes the candelabra came up. The auctioneer announced that he had three absentees – and he would therefore start the bid at $100. This meant that two of those bidders had left bids under the $100 mark – perhaps they knew it was a reproduction?

The bidding went up in small amounts with two bidders in the room and my bid written on the auctioneer’s piece of paper. This meant I could stand at the very back of the room and simply watch the fun. The bidding slowed down and it looked like I had it at my top bid – it was surely mine.

Then the bidding seemed to speed off again. Soon it was down to a duel between myself and the previously mentioned DEALER. The auctioneer motioned to me to remind me my bid on the page had run out. I didn’t need reminding. I was already locked into a battle undo the death.

Now, dealers are supposed to pay 30% of the price they are going to charge in the shop – so at $300 in the room he needs to get $900 in his shop. This calculation was going through my head with every rapid-fire bid and the tussle intensified. The bidding climbed – but surely he had to pull out soon? No dealer wants to pay retail? His bid. My Bid. His bid. Then at last he refused to pass one of these key $[X]00.00 thresholds that always provide psychological barriers in auctions. 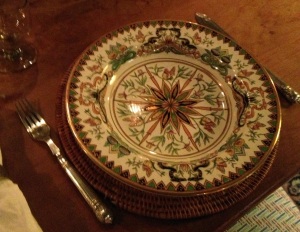 In the end it was a lot more than I’d expected to pay. I’m not sure I’m the best strategist. Annoy me (that is bid against me) and its ultimate firepower, thermo- nuclear war!

I got back into the car to return to work. At my desk I thought ‘I’ve just spent a ridiculous amount of money on the William IV candelabra (the authenticity of which is still uncertain). Worst of all I’d paid more than I would have in Auckland! But rather than the usual buyer’s remorse I thought – so what? Buying candelabra is a great thing to do in one’s lunch hour and it’s only money.

Over dinner Peter quizzed me on the as yet uncollected item? How much had I paid for it?  I refused to confess, in part because there was some lingering doubt – had I paid a fortune for something I might get from a thrift shop for a fraction of the price? Would I being eating humble pie over the dining room table tomorrow?

When I picked up the candelabra the next day – the second I lifted it off the auctioneer’s table – I knew by the weight and scale of it that it was the real thing. It was solid and the dimensions were generous – and it was much bigger than I’d recalled. Once home and on the table it looked absolutely splendid. We placed it in the middle of the dining table, lit a fire and dined, each of us peering through the candle-powered silver tower at the other over dinner.

This allowed us to look at the generous proportions of the base and compare the flaring sides of the columns with our other smaller Sheffield candlesticks. The heavy bulbs on which the branches sit were generous and splendid and then there is the height – at 21 inches/535mm it towers over the table.Did I pay too much? – Well in my mind the answer – no! I’m pleased I won the battle and that the candelabra sits on my table and not in a shop.

With the battle behind me, what now becomes obvious  is that I need a second and matching candelabra. With two you can average the price paid and declare the pair to be a Shabby Baronial bargain.