Blue and White [and Broken]

Today’s haul from the auction house was spotted the day it was unloaded from the truck, a whole week prior to the general estate sale. My eyes went immediately to an old wooden apple box filled with old plates. My delight at the appearance of the box must have been obvious – because the man at the auction houses clearly felt I needed reigning in – ‘they’re all nibbled’ he called out.

The Worcester – chips and all.

The main attraction of the box was a lovely part set of Worcester plates – probably mid Nineteenth century. On closer inspection they did indeed all have chips of some sort. Now, when I was growing up a chipped or cracked plate was a terrible thing but I’ve moved on, (dismissing this a suburban nonsense). If I die from a disease concealed in my ancient Worcester, so be it, it’s not the worst thing that might befall me.

The rest of the box was made up of items of various vintages and all in questionable condition. We placed a detached, I don’t care either way, absentee-bid and to our surprise came home with the box the next day.

The Worcester cleaned up nicely and there is enough of it to make a setting for four for a basic meal. The plates are solid and heavy, the decoration splendid and sufficiently colorful that the chips get lost in the in the visual effects – so no one will ever really spot them.

However the real treasure of the box lot were some blue and white plates we suspect are of some considerable age. They were indeed nibbled – some were even broken and glued back together – but they still had real presence. This got me thinking about the value of broken things.

I have plenty of broken and pieced back together ceramics. Strangely most of it is Chinese in origin. The first time I purchased something in this area was a rather nice blue and white bowl – that surprise, surprise – I only purchased because no one wanted it at $20. Still it had good scale and presence as a decorator item.  When I got it home I discovered that the method of repair was via metal rivets which in themselves seemed attractively aged. For a while I became a little obsessed with the craft of metal rivets and they still appeal now, a lot more than does carelessly applied Araldite. 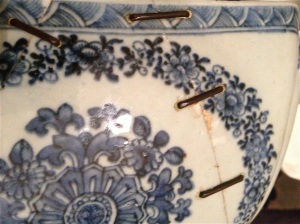 The piece in question – still a feature of the library (where it sits on a Georgian washstand) is one of those pieces made in China for the European market where the decoration all gets a little lost in translation – or at least that’s what I think it is?

My whole point of this posting is that made in China for Europe, verses made in Europe to look Chinese takes some sorting out – the details, colour, feel and tone of each type of production need to be learnt by heart. 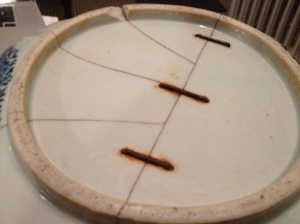 Things are further complicated by the endless reproduction of these styles through the 19th and into the 21st century. However one fells that this is an area one should know about if we are even pretending to be a connoisseur of any description.

Most of the information about the original pieces that you need to know comes in boring books. I say this because the best of them are ancient with old illustrations and dense text. You have to be devoted and, unlike Oscar Wilde, I am not a total full-time devotee of blue and white china.

To really learn what is in the books – even if you do read the text – you need to look intensely at the works in question.  You can do this in a museum but this excludes touching and experiencing the work which is even more helpful. Looking at detail of decoration again and again examining forms repeatedly is the best way to learn. This is best done at home over and over again as you use or simply dust at the items around you.

It occurs to me then that a broken work, picked up for less that a $20 dollar bid, or even less, provide excellent learning tools – preparing you for the day the real thing, in pristine condition, comes along. In the meantime the intensity of decoration means that no one much is going to notice the flaws in your piece – and a room will look better for their presence. Our two plates are for the moment propped up on stands in the library in their own way as full of knowledge as are the books that surround them.

1 Response to Blue and White [and Broken]