A night in the Garden room

This is a small space created from what was once the washhouse. In the tradition of that room it is not connected to the main house except by the back verandah. The old concrete-floored washhouse was built on the ground – therefore at a different level to the rest of the house and thus was only barely connected. We’ve left it that way. 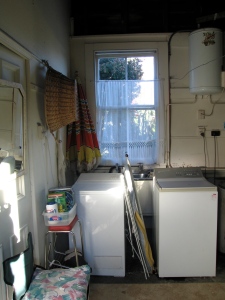 The old communal washhouse had a few – if limited charms – its concrete floor meant it was always cool. It had lovely deep laundry tubs and an original copper. It got good late afternoon light from a biggish window and had a generally nice feel to it. However in reality it became a bit of an unused space. Once the other flats cleared out, there was nothing communal about the laundry anymore and it just became a junk room.

When we rebuilt we raised the floor but decided not to create internal access. We thought long and hard about this but in the end what we have is a small sleep out.

It is called the Garden room because it looks into the garden and it houses our collection of garden books. There was also a Garden room in Brideshead Revisited in which Charles painted murals while the besotted Sebastian looked on. Factors like that are never far away in my mind. (Oh, for a Felix Kelly/Charles Ryder to paint me a mural in that room). In the meantime the room houses the books that don’t fit in the library and art works that don’t work elsewhere.

We often send guests out to stay in this room and some have come to prefer it – despite early morning trips in to use a bathroom or to find a glass of water. We have talked about providing a television, but as it stands it is a media free room, one that is instead blessed with an enormous number of books.

For us, those books are some of those we are most attached too and so the room is populated with the books that form the historic pattern of our lives. It is interesting to note how often the books of which we are particularly fond, find their way into the peripheral places in our homes.

First of all there are the garden books. I’ve written about the bulk acquisition of a mysterious garden collection and of my love of Beverly Nichols – garden and décor writer supreme. We dip into the shelves in here and bring particular books back into the main part of the house depending on which aspect of the garden we are currently obsessing.

Then there are the ‘black penguins.’ I became obsessed with these as a university student. I was reading French Enlightenment philosophy, Voltaire, Diderot, Montesquieu (and enjoying it) my flatmate was reading classics (I ventured as far as Plato and Ovid).  I came to find anything in those stark black covers worth a tilt. Later I got into Balzac and Zola in black jackets and Peter has added Gorky, Stendhal and Flaubert.

After that – oh and a good few shelves of gay books – of the literary kind (Paul Monette, Adam Mars-Jones, Andrew Holleran, Edmund White) it all gets well eclectic – a mish-mash of the life’s work on two generally enquiring minds.

Standing in front of the shelves while writing this, there are books that call out to be brought back inside – making strident arguments that their well read paperback status should not necessarily exile them. There are big biographies (Sickert, Sitwell, Chanel and Muldoon), histories of strange things (tourism, Symbolism, Australia), obscure novels by one time promising authors (Frantzen et al.) and host of very obscure between-the-wars volumes including Antony, A Record of Youth (1935) by his father Earl of Lytton (a personal favourite of mine).

Yet these books, like the pictures – an E. Maxwell Fry etching (because I admire him as an architect) a 1940s photograph of a staff-do in an unidentified department store, a Geoffrey Heath photograph from his graduate series, an unfinished R Jack Hutchinson oil of Auckland wharves and a couple of early 20th century embroideries – really are the books that make the house a home. They are  friendly books and this goes a long way to making this our friendly room.

Yes an old quilt helps, as does the soothing Wedgwood green walls and the funny curtained bookcase in a post war polished chintz, but the reason most people choose to sleep out here is the comfort and company of the books which beats the television as a baby sitter/night-light every time.

This entry was posted in art, colour, gardening. Bookmark the permalink.