When pretty and useless collide 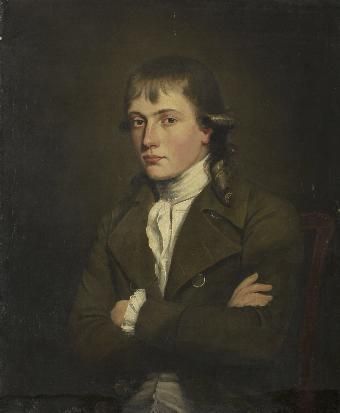 This week I should not have been bidding at the local antique sale. However I was slightly out of sorts, having missed even placing a bid on a painting I’d had been researching and generally keeping an eye on for weeks elsewhere (only to then hear it went for a song). So, looking for a little sweetener to brighten my day, I left a bid or two, at the local sale.

The auction fates ensured my compensation had an ironic twist in a form in a lot of nine green plates by one of Tilly Kettle’s contemporaries Josiah Wedgewood (1730 -1795).

The jasperware plates are not old. I’d guess they come from the 1960s or 1970s. This is based in part on the fact that they were the very things that my grandmother had in her house. I must say that I paid little attention to them at the time but one of her heart-shaped pin dishes has ended up on my office desk, via my mother. Chosen in part because it features a handsome young Greek boy watering a winged horse.

The green plates are in their own way very good, that is, they are carefully made and beautifully detailed, as one would expect given Wedgewood had, by the 1960s, been making this sort of thing for about two hundred years.

The little classical vignettes are full of character and there are some great narratives at play – two women and a goat cluster around a child atop a pedestal, something strange going on at a spring, two women pinch Cupid’s arrow while he sleeps.

Two of the plates were of a sensible practical scale, essentially side plates, with their plaques arranged around the rim, but the rest of them are no bigger than a coaster.

This was the initial idea – I’d get a couple of sensible plates in the lot and perhaps what was left could be converted to use as rather distinctive drink coasters? However on testing this plan I found the raised medallions in the centre interfere with the glass and make the whole ensemble unstable.

So it appears that my plates are essentially useless – unless I perfect the ultimate tiny cucumber sandwich. 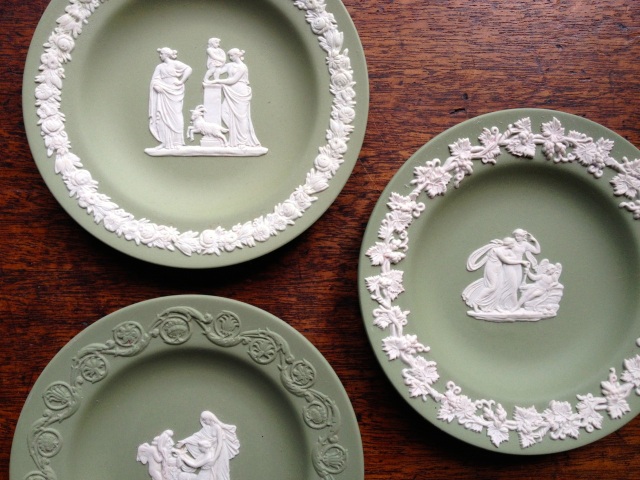 It worries me when pretty things and uselessness collide.

When I look at the missed Tilly Kettle I wonder if the pretty boy grew out of that sulkiness and in fact became useful? He, like the plates clearly had a decorative use for a while, but what was his long-term scheme for survival? It’s questions like these that have brought me to really enjoy collecting portraits.

Back to the plates. I worry if they are only pretty their chances of survival are essentially nil and yet they deserve to survive. In order to find a use for the new plates I thought I’d go back to their original intention but what exactly was that?

My grandmother’s sat on tiny plate stands on a high shelf and it seems that really this was their intended purpose. When quizzed on the subject Peter describes them as ‘tasteful thank you presents.’ No real leads for repurposing there. They were, it seems, simply prestige trinkets designed to both spread the name Wedgewood worldwide and to act as a marker of good taste in suburban homes.

As it turns out objects designed solely for tasteful gifting generally have a poor style trajectory. Not least because people append inflated value to the items, evidenced if you visit the jasperware pages of Trade me or E-Bay.

Some of the little plates turned out to be ashtrays, a little hard to find a use for right now. I wonder if eventually people will come to forget what those plates and bowls with funny little grooves to the side where for. What once were once ashtrays will transition into nut bowls etc. However this gives me no leads either. 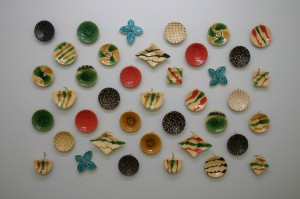 It occurs to me that the contemporary New Zealand potter Richard Parker makes a small plate/bowl of a similar scale that he arranges in large wall works – and perhaps this might be a way to take Jasperware trinkets – as a large installation work of decorative purposes.

If I can achieve 750 x 620mm of coverage it will occupy the space I’d already set aside for the Kettle. However in the end I can’t quite see myself doing that, any more than investing in multiple tiny plate stands.

So for now the little plates will sit in a pile while I consider a potential use.

However their real purpose, at least in the short-term, is to remind me to organise myself in time to place bids at auctions for the things I really do want.  Because out there somewhere someone has ‘my’ Tilly Kettle which has a well established purpose integrated into it the day it was conceived – to hang on someone’s wall and remind us of the sulky beauty of youth and the good style choice that is a well-chosen green coat.

1 Response to When pretty and useless collide