I have always had an ambiguous relationship to Christmas cards. This may date from the competition I had with my best childhood friend about whose parents were most popular and she effortlessly won. Or it may have been those weird strings of cards looped round pelmets and even interwoven with venetian blinds. Or was it the cheery Santa Claus vision replete with snow and reindeer that fell out of favour with my radical sourness as a teenager? Whatever, I still find Christmas cards a little scary, like a loud knock on the door or the shrill call of a telephone during slumber.

But Douglas, with characteristic flair, may have worked out a solution.

Auction catalogues in our house are awaited with the avid interest usually kept for the next Booker Prize winner. Douglas normally rips off the cellophane skin and a long and almost lurid silence falls as he meticulously works his way through each entry.

One of these entries was enigmatic but full of possibilities: Christmas cards sent by Norman Hartnell to one of his models resident in New Zealand. Alas, we were Hawke’s Bay bound so we asked our intrepid reporter, Shonagh Koea, to go and inspect the cards. The report back was excellent. If we were not buying them she would bid herself. (What better recommendation could there be?)

‘So it was’ that a while later twelve cards were posted down to us in a bundle.

These are some of them. 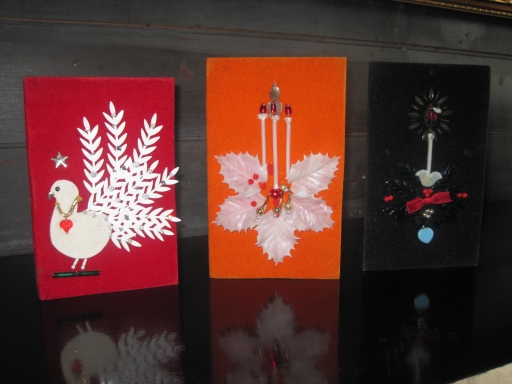 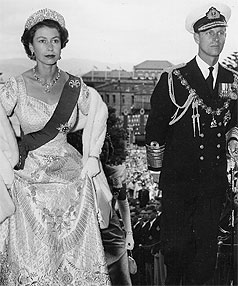 Queen Elizabeth at the opening of Parliament New Zealand 1954.

They are really very beautiful. Most have a very strong colour background and nearly all of them are heavily bedizened. (The card is actually quite stiff.)

For anyone interested in fashion and history, Norman Hartnell was the Queen’s couturier for a long time. He it was who designed her historic Coronation gown (which can be seen here, in Wellington, minus the cumbersome horse-hair padding that made the gown so beautifully full on Coronation Day.) Is it too much to say that there are correspondences between the heavily embroidered style he favoured and the cards he sent?

But both Douglas and I are very grateful for the entirely false squadron of Christmas cards that now bedeck our studio. It seems to intimate that we have a whole flock of Christmas-card sending friends, all of them summoning up the ghost of Norman Hartnell.

Norman Hartnell once said “I despise simplicity. It is a negation of all that is beautiful.” So he seems the right designer to be making Christmas cards.

The problem is Christmas is seldom either beautiful or simple, except that is if you get your hands on a dozen bespoke Hartnell Christmas cards!

Norman Hartnell sent to Cambridge University in the 1920s, strayed from his degree into designing for the theatre. He left university and set up the Hartnell salon in Burton Street Mayfair in 1923.

He designed for the smart, theatrical set and eventually for royalty. His most famous designs for Queen Elizabeth’s wedding dress in 1947, for which British women sent in their clothing ration coupons and her highly celebrated 1953 Coronation gown.

Earlier Hartnell had  done much to establish the Queen Mother’s sense of style. While she was still Queen Elizabeth in the 1930s her Hartnell wardrobe had ushered in a new romanticism to women’s clothes and was much admired on her Paris visit of 1938.

Like all fashion houses the Hartnell salon’s work was seasonal. This meant an annual spell through August in which the embroidery workshops had little to do. So as to keep the girl’s busy he set them to executing embroidered Christmas cards which he sent to friends and favoured clients.

1 Response to Merry Christmas from Normie