Havelock – Hero of Cawnpore and Parian

A wet Saturday morning and I have an injured Achilles’ tendon. I was pretty determined not to go anywhere much at all but to stay inside. How then did I end up in Hastings – clutching a Parianware bust in my hot little hands?

The agreed outing was a quick trip down to the framer (to collect a reframed lithograph of the Great Eastern acquired in a tired matt at M&F last week) and to then to the farmers’ market for supplies. Peter, however, decided mid-trip that he needed to go to Hastings there and now for a pair of shoes (it is not widely known that Hastings has superb shoe stores) and I agreed because they have an equally excellent library and I was in need of some comforting picture books to wile away the afternoon.

Despite having been in Hastings two weekends ago I decided to check out the generally good Hospice shop there – sure enough there was a little French provincial cooking dish for $5 and Peter spotted, on their sale table, a nice old Wedgewood plate with a good botanical print of geraniums. Then, at the counter to hand over my $5, I spied, in their glassed in ‘antique case,’ a Parian bust of Major-General Sir Henry Havelock, (the hero of Imperial India after whom Havelock North is named) and at a reasonable price (given some of the Hospice’s antique prices are nuts, even if you are providing support for those in a hospice).

I rather like Parian figures of obscure Victorian heroes. I now have Albert the Good, (acquired in Tirau), Charles Dickens (acquired in Dunedin), Walter Scott (acquired in Wellington) and Napoleon (a present from Peter). I am avoiding the composers but would happily add Tennyson or Byron or perhaps Gladstone and the Duke of Wellington. 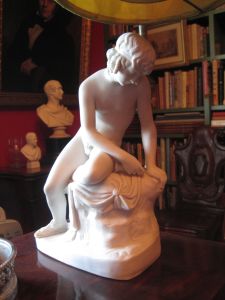 Then there are the two larger figures. These were slightly ironically acquired at the same sale at which I sold up my modernist collections. It seemed right to buy something rather than just be selling after all and Narcissus and Musidora were as good a choice as any. Musidora lives in a bell jar in order to keep her detailed modeling free of dust. I rather like it but Peter has allsorts of feminist issue regarding the keeping of women in glass jars – that come all to obviously from Sylvia Plath – “The bell jar hung, suspended, a few feet above my head. I was open to the circulating air.”

The original Narcissus by John Gibson is in the Gallery of New South Wales and I make a point of visiting him whenever I’m there but these smaller versions are a little less likely to go crashing through the library floor than their original marble  counterparts. 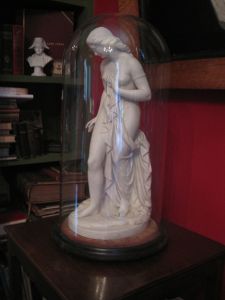 I’ve come to like Parian for the very reasons that it was such as success in the first place – in that it provides superior copies of Victorian works of sculpture – to the decorating mad middle classes.

Today there is little understanding of the Parian process. I’ve been stalking (the official term is watching) a piece on Trademe for sale by someone with no idea what it is they have and therefore want a fortune. They refer to the piece as  ‘a one off and a really beautiful collectors item’ (half true). They continue ‘there were a few other different statues out there of which collectors may have, but not of the same person, as only one of each were made.’

Well no – Parian was exactly the opposite and one of those great mass production triumphs at which the Victorians excelled. Where they become rare is that so many have been broken – and many although appearing intact have fingers and other smaller details missing. I recall seeing some stunning pieces in an antique shop in Palmerston North – each one either seriously reassembled (with telling glue marks) or with small details missing – I resisted.

My Trademe nemesis insists that their piece was – ‘commissioned by HRH Prince Albert to be made by an Italian Sculpturer, [sic] and … made by a person by the name of Copeland. Where does one start? I recommend Google. DLJ 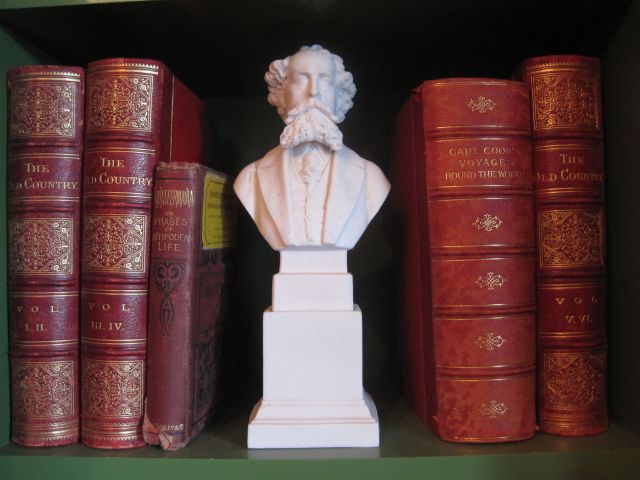 This entry was posted in art, auction finds etc.. Bookmark the permalink.

1 Response to Havelock – Hero of Cawnpore and Parian