Board and batten ceilings

There are essentially three different ways of ‘restoring’ the appearance of an old board and batten ceiling of the type common in New Zealand houses of the nineteenth and early twentieth centuries.

Ceilings often survive the redecoration and renovation of houses, (particularly villa ceilings, as they’re just too high for anyone to want to bother). Usually they have had little more attention than a quick coat of paint. Of course that in itself can cause plenty of problems, you may encounter ceilings painted matte black, gloss white or with sprayed texture finishes.

However when a ceiling has been fiddled with – it is generally a mistake to overlook its restoration. Ceilings are an important aspect of a Victorian or Edwardian house and need to look right if you’re going to pull off any serious decorative scheme.

In the 1960s and 1970 the first generation of villa restorers stripped ceilings returning them to their natural wood state. I don’t want to dissuade anyone with this plan but you’re going to have to have a lost of patience and spare time. On the other hand if you have a room with an original timber-finish ceiling think long and hard before you commit to paint.  Yes old timber ceilings make rooms darker but consider what decorating options come from this (warm intimate rooms for evening) before committing yourself and the house to a first coat of new paint a hundred years after the house was built.

This posting is about the three states that ceilings are usually to be found in and what your options are.

The first thing to be done is to establish the state of the ceiling. Don’t assume that in a house with lowered ceilings or with flat wallboard ceilings that the original board and batten ceiling isn’t still there.  Few ceiling fiddlers bothered to remove old ceilings and new ceiling applicators often attached directly to existing ceilings – particularly in the period of ‘ceiling tiles.’ 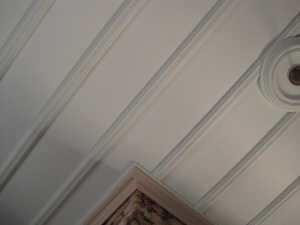 This is of course the best condition to find a ceiling. You will need to do basic repairs and painting to bring your ceiling back to a respectable finish. More likely if a new ceiling panel or tile has been attached to the original there will be a series of tacked on metal clips to be dealt with.  Wrench these off with a hammer or small bar and then its just filling and sanding until you get the surface you’re looking for.

Some of the boards are bound to have split and these can largely be filled. In the end it’s important to remember that this is an old ceiling and you’re unlikely to get to a pristine state. 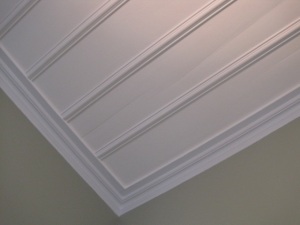 On many occasions previous renovators will have removed the battens in order to get good adhesion of their new surface to the existing boards. If the boards are in good condition it is worth considering simply adding new battens. These you can buy either at a demolition yard or reproduction through Villa & Bungalow or another similar supplier. Old battens tend to split when being taken off – so reproduction might be better.  Certainly MDF reproduction battens are significantly cheaper and when covered with paint do the trick nicely.

Here’s a tip try sanding filling and cleaning up your boards before you put up the battens – its easier to maneuver the sander before the battens go up.

3. Both Board and Battens gone

New battens go up over wallboard

Then there’s the renovators/modernizers who have removed the original planks – usually for firewood. In the same class are boards that are too badly damaged or if you wish to make two rooms into one.

You can of course put up new boards – but this going to cost significantly. A much better option is to use a wallboard and then to put battens over the board – replicating the spacing of original Victorian period battens. 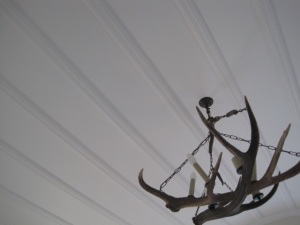 completed new board and batten ceiling

The end result is indistinguishable from the original and once its all painted – no one will know – leaving more money to be spent of important decorative details.

This entry was posted in original surfaces, practical matters, Uncategorized. Bookmark the permalink.