an oft-heard tale of silveriness

I keep telling myself that is it is time to move on and stop posting about items made of silver – their neglect, ridiculous cheapness and how to clean them.  The problem with this all-together sensible thinking, is that I keep finding beautiful neglected items of silver at ridiculously low prices. This is not an inherently bad thing but I somehow am unable to stop telling people about how great little neglected bits of silver turn out to be. It is only  by way of encouragement for blog readers to get in on a good thing. So here I go again

The tray perched momentarily on top of the box at the auction for a photo – then put back at the bottom – it’s an old trick but worthwhile.

It was a better than usual M&F general sale. In part this was because of the presence of items from the estate of an elderly woman from a well know local family. However I don’t think this particular box was hers. It was made up of a selection of small items mostly electroplated silver but including some old Victorian tiles and a bashed up but decor extremus acceptable vase in black basalt Wedgewood.

The key item in the box lot was a largish tray that took up the length of the apple box the items were packed into. Although it was clearly silver plate on copper, there were no marks and the silver had turned an unattractive yellow patina – which suggested the presence of nickel silver. In my books solid silver plate goes black but exposed nickel plating goes yellow. This means you can tell the quality of neglected plate even in a distressed state before you purchase.

Therefore I suspected this tray would not polish up.  It did however have a rather nice border of aesthetic movement floral design. So the bid I left reflected a certain  ‘don’t really care whether I get it or not’ attitude.

I got it and when it came home the box was divided up into keep (the tray, the tiles, the basaltware and a little brass strainer) and the send immediately to the local charity shop (this was done). Of course the tray was the star keeper, the rest a nice bonus as is the way with a good box lot. 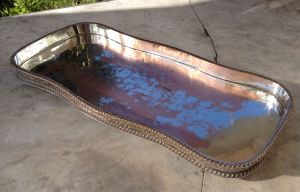 polishing complete – a lovely tray revealed under the muck

The tray refused to respond to my instant cleaning (Rinso method) so I sat down with traditional metal polish. What I soon found was that the yellow stain was not an indication of the presence of worn electroplated nickel silver but some other mishap, a spill of some substance. What it was, was unclear but it came off  revealing the rippled surface and lovely silvery coppery-ness of a superior Sheffield plate tray. The banding around the tray has lost a lot of its silver but this added to the tray’s special charms and it took its place on the sideboard holding our adopted family of small glasses.

A good thing is that were other non-silvery treasures at the same sale which will make a good subject for the next posting.