The Library at night: the lighting effect is achieved with two mantlepiece lamps

When I first moved into this house I really only occupied one room – now the Studio – which was then somewhat exposed to the street. This more so once we took out the aluminum joinery and put in enormous wooden sash windows. We attracted a lot of attention from people out walking in the summer dusk, in part because things were suddenly happening to a house that had remained unchanged for so very long.

Once while attending an after work function a woman I did not know said, “I know you, you’re doing interesting things with lamps.” This struck me as unusual as did her follow-up line “I must pop in some time and have a look.” Although she never did ‘pop-in,’ I spent a long time asking myself – what was it I was doing with lamps that the neighborhood found so unusual?

The pendent lights that occupy the centre of each ceiling here, are seldom used to light the rooms. I tend to think of these as house lights – the lights you bring up to get people out of a cinema – or that you turn on in order to vacuum a restaurant in which a single group of diners are lingering. Every room here has a lamp and in some cases five or six. It is the sort of arrangement that my parents would have objected to – why pay for five light bulbs when one very bright one, centrally placed, will do?

The answer of course the preservation of some sort of control over the mood of a space. The in-ceiling recessed down-lighting now universally favored in most homes (even when renovating old houses) is unflattering to both the room and the occupants. Do we want every aspect of our lives thrown into merciless high relief?

What’s more, there are more subtle ways of changing mood than via a dimmer switch and the use of a well-chosen lamp is one of them. Despite this, most people prefer to sit (or worse expect guests to sit) in the harsh glare of overhead lighting. 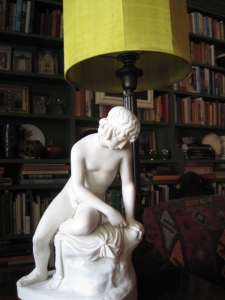 My new friends Helen and John Gloag have opinions on the general effects of lighting but even more opinions regarding lamps – specifically what might be turned into a lamp. It seems that the Gloags had difficulty finding good contemporary lighting. They were big on fossicking in shops to find light fittings that predated electricity (aka candle-powered) and having them wired for electricity. Something that it has only just occurred to me, you couldn’t do in the days of gas lighting in the generation before theirs. So for the Gloags there were lots of old candle-powered wall sconces and chandeliers cluttering antique shops – which they cunningly wired up.

Fast forward to today and in the right second-hand shop or auction you can find all sorts of wired up object lamps made from a whole range of things including vases, jars, and figurines – now discarded in favor of wired-in down-lights.  Such is the cyclical nature of decorating.  These aren’t always sought after. Contemporary lamps are often thought of as a portable spotlight – a task light that can be moved to any point in the house to illuminate a chosen crevice. Whereas what you’re often looking to achieve is a soft pool of light in a discreet corner of a room for which old lamps can be perfect.

What always concerned the Gloags most about a lamps was not the base but the shade and their problem is, as it turns out, generally still our problem.

In New Zealand, the standard of lampshades available is generally abysmal. Anyone out there of a craft/skill bent could do worse than pursing a career as a bespoke lampshade maker. Even better still become a dedicated lampshade restorer, as it’s not uncommon to find a lampshade once glorious now tattered attached to an old lamp.

The Gloags talk a lot about silk shades. The notion is an intoxicating one – but you can almost forget finding anything close to that unless of course it is attached to a lamp that has neither been turned on nor placed in a sunny room for any period of time. Most of us are going to have to settle for a modern alternative available through a chain store.

But we’ve lost something more than simply access to well-made shades. The Gloag’s had a whole raft knowledge of lampshade types and variation that is generally now lost.  They write with authority:

Shades can be designed to give the greatest variety in the tone of a room: it is a matter of colour and material. For example a red shade lined with white gives cheerful warmth, while purple and blues tend to produce a brilliant circle of illumination immediately beneath them and to diffuse a rather subdued light.

For light to be distributed evenly pale tints are necessary: cream, pale yellows, and pinks and light blues achieve evenness, though almost any effect may be contrived by the skillful use of the varied materials from which shades can be made.

It is possible to make very pretty little shades from pieces of old silk Paisley shawl, and trimmed with a soft fringe and line with white they can be used for small standards or candlesticks.

Their lighting chapter ends rather nicely with

There should never be any great difficulty in making a room look attractive after the blinds are down and the curtains drawn. It is a matter chiefly for our colour sense where we need not allow obstacles to perplex us in the achievement of beauty and distinction.

With a little imagination you can easily do “interesting things with lamps.” Here there are rescued wooden standard lamps and brass reading lamps (which the Gloags tell me should have green shades). There’s a 1950s task light given to me by an old architect friend. There are two lamps in turned wood painted to look like they were designed by Keith Murray and made at Wedgwood. There are alabaster urns that light up. There are even lamps awaiting shades and at least one old shredded silk shade.

The Alabaster mantle lamps used in the library. The effect is subtle but effective

These days heavy blue drapes curtain the Studio windows and a hedge has grown up between road and us. The locals still perambulate in the dusk, dogs in tow but the house no longer attracts quite the same attention – well it is at least a while since any stranger encountered in the cocktail hour has expressed their intension to pop in and check out the lighting.

3 Responses to Interesting things with lamps