The House in Good Taste.

I discovered the book almost by accident. Stooping to look through a box of indifferent books at the local auction mart I came across its very strange cover.

Elsie de Wolfe’s The House in Good Taste, has an almost defiant colour schema. It is most unusual. The grey has a touch of blue in it, the pink is rather weird and everything about – the very concept of good taste – is so from another world that it caught my attention immediately. 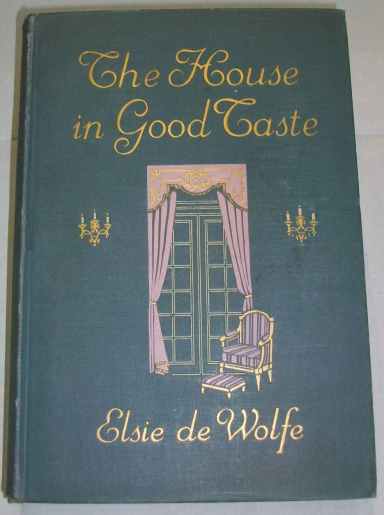 It was a hardback dating from 1913 and had one of those entrancing almost fairytale covers. A miniaturised chair and footstool sit by French windows and curtains. It was also in excellent nick.

I knew who Elsie de Wolfe was, or thought I did. I had an idea at the back of my mind she was a lesbian decorator who introduced a kind of modernist Syria Maugham decor in the early part of last century.

She was a name and a brand. Wikipedia, such a reliable source, tell me she was the first person to define the position of ‘decorator’, that she pioneered blue hair (which in my youth, half a century later, had spread to old ladies in New Zealand). I also read that she made a ‘strategic’ marriage to a British ambassador but shocked Parisian society when she entered a room doing handstands. She sounds like my kinda gal. Not.

Anyway I wanted the book. Then I opened it. Inside was a stamp: ‘School of Art, Rutland Street, Auckland.’ Now I really wanted the book. There’s something about provenance which is magic. The sense of hands having passed over it, or eyes which have looked at it. I had no idea whether the book had stayed unread on the shelves at old Elam: or had Lois White, for example, opened it up and glanced through it on a slow day? I quickly glanced round me. Had anyone else seen it? The auction mart was unusually busy that day and I spotted the owner of the local bookshop.

Immediately I plunged the book back into the box then covered it over with some innocent books on antique roses. I became convinced everyone in the auction house was after ‘my book’. (It had become ‘my book’ in a few moments of longing.) Was that fat old man looking at a clapped-out motor mower really so interested in an esoteric book on ‘good taste’? I knew auction bidders came in all sorts of guises and the following day, auction time, would be the test.

Fortunately it was box number 8 so I put aside the book I was writing to a very close deadline and attended the auction. Astonishingly – amazingly – not a single person was interested in the box and I got it with a casually raised hand. 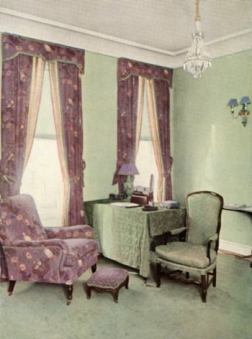 The box, when I looked at it again, had a lot of interesting peripheral material but now I had ‘my book’. I would read it at some point – I already liked her mauve and green sitting room design. But what gives the book its air of mystery, of having waded out deep into the waters of the past, is not only the strange colours of the cover, or the inside portrait of the hand-standing aristocrat – or her tips on how to make rooms lighter and airier or more feminine. It’s that lovely evocative stamp of a lost world – ‘ELAM’ School of Art, Auckland.

This entry was posted in auction finds etc. and tagged elsie de wolfe. Bookmark the permalink.

3 Responses to The House in Good Taste.