We have for some time been looking to add extra storage to the little china pantry we have created. The room has a large sideboard already overflowing with china and a small bookcase stacked with recipe books. However at the rate we acquire both china and recipe books, more storage was clearly going to be  needed.

We were looking for a butler’s stand. The logical thing would be to move the old beaten up one from the studio and to buy a nicer looking one for the big room. However that piece seems so right in the position that it’s in we decided instead to find another for the china pantry.

The local auction house failed to oblige and those in far-flung destinations didn’t seem quite right. So when M&F offered up a large painted safe which we thought might do the job.

Described as a Kauri (a local version of pine) safe, it was painted in a thick dark chocolate-brown – but some of the original blue paint could be seen underneath.  While it looked like it had come from a shed on a farm somewhere, I suspect that someone had purchased it in order to do it up but simply run out of puff because there was a strong reserve. This happened to be our top bid and it came our way.

Taking a good look at it  – it was solid and in good shape. There was no sign of rot or any other real decay, just an annoyingly unstable looking paint surface.  The wire weave sides were distressed. I had initially intended to replace. However closer inspection revealed that each was held into place on four sides in what were nine separate panels of wire. This was my first clue to what revealed itself to be a quality – well made – piece of furniture and not the country item I first thought.

Given a chance Peter will paint anything green, especially anything destined for the kitchen. So I wanted to have an alternative ready for the eventual suggestion that we might paint the safe green.  There is a little shelf on the wall of the china store and on it an assortment of small vases – most of which are in constant use for flowers plucked from the garden. 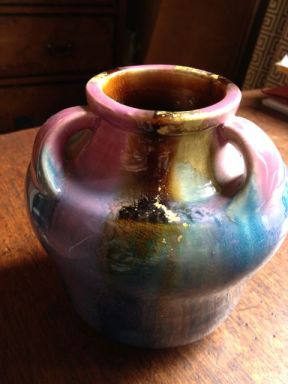 My favorite is a blue vase with splashes of pink and yellow with a real fire-licked quality in which the colours are fused together. I love these early twentieth century Japanese vases (never deemed very collectible) because of their excellent glazes and color ranges. There are about half a dozen of them scattered about the house. So I decided to use this one  as an inspirational starting point.

lowers plucked from the garden. My favorite is a blue vase with splashes of pink and yellow with a real fire-licked quality in which the colours are fused together. I love these early twentieth century Japanese vases (never deemed very collectible) because of their excellent glazes and color ranges. There are about half a dozen of them scattered about the house. So I decided to use this one  as an inspirational starting point.

The safe had been blue in its early life but that seemed too close to green and the room itself is yellowish, so another yellow seemed an unwise choice. So this left pink. Except that pink is about the hardest colour in the world to get right – most new-pinks end up looking – vulgar. The best pinks are old faded pinks.  When I got the vase, the paint charts and the safe together in the full light of day I released it wasn’t going to work. After some discussion we moved on to another old piece of china, this time the border of an early nineteenth century Irish dinner service somewhere in a colour range best thought of as something-berry.

I am not one to attack old furniture with an orbital sander – but in this case I realised that there weren’t too many other options. The loose paint needed to be removed for a new coat to have any hope of sticking.  It took only a few minutes to remove the first of the paint and a few more to realize that the safe wasn’t Kauri but a hardwood. I am even less the type likely to attack a piece of mahogany furniture with an orbital sander and so the whole dilemma whether to paint or strip reared its head.

The idea of an old mahogany safe glowing with rich colour in the corner of the room was rather appealing but the sheer labour required to get it to that point (in the 32 degree heat) was not.  I fantasized for a while about stripping and varnishing. I then considered a two-tone effect with mahogany details picked out – but in the end I decided to be staunch and went back to the sander.