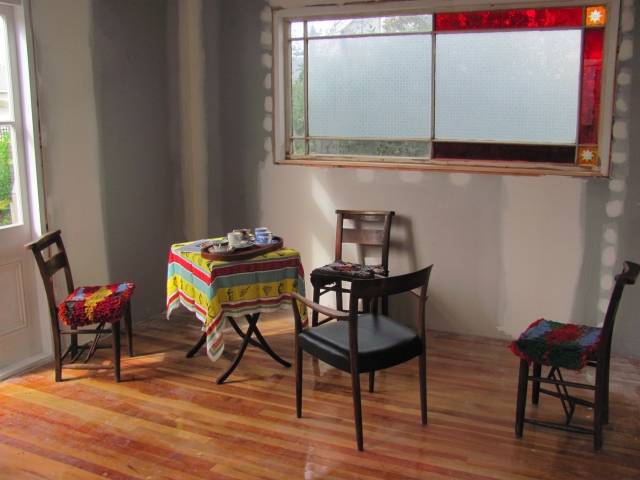 Somehow we decided the sun room aka back dining room would have coloured glass windows. This was partly because we had haphazardly collected old Victorian windows and now had to justify these fevered purchases. But the idea of a kind of conservatory seemed pleasing. There were neighbours on one side we could tactfully edit out – and the fact is Victorian glass is pretty glorious.

I think we’ve written here before on the way old glass ripples, distorts light and refracts. Coloured glass adds another dimension. (Who can remember Kezia in Katherine Mansfield’s Prelude looking out at the garden through red blue and yellow light and seeing an entirely different landscape each time?) 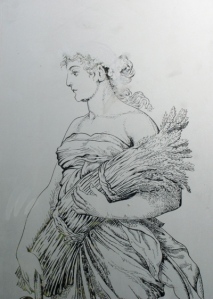 However the glass we had, was a mixture. There were the double doors, with their softer hues in a complex, almost Puginesque period pattern. In the middle of one of these doors was a fantastic etching of a woman representing Summer. The other pane was broken. The unbroken pane was removed and inserted into a new frame, has become a rather rude shock for Douglas: as he stands at the toilet he has a lady with a scythe gazing down on him speculatively.

I thought I’d try and find replacement glass for the surrounding coloured panels.

Naively I went to a local glass merchant.

Surrounded by current-vogue glass, with its minimalist colour range running the gamut from bird-dirt to mouth-gargle blue, I had no idea I was at the beginning of a journey. 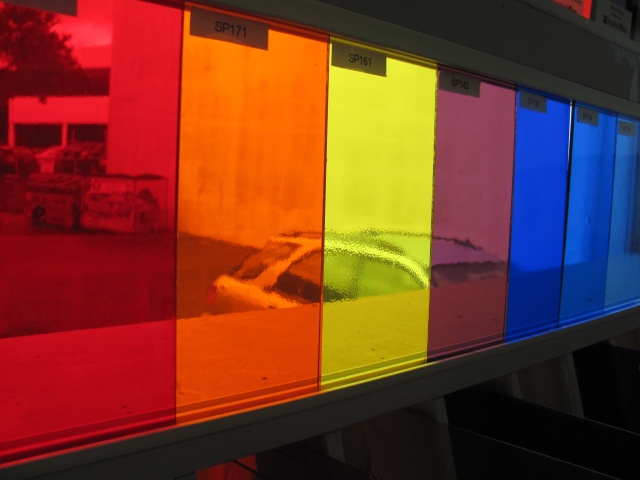 ‘That’s more than a hundred years old,’ the glass man said to me accusingly.

He took me out the back, left me with some shards while he went off to the important business of morning tea.There was a definite sense of reprimand in the air. Eventually an older model came out and conversationally said he used to always make sure he collected any old glass and kept it for just such an occasion. But when his business was absorbed – I felt the business might have ended badly – all the old glass was trashed. Their idea of ‘old’ was1970s dimple glass and there was no match there. 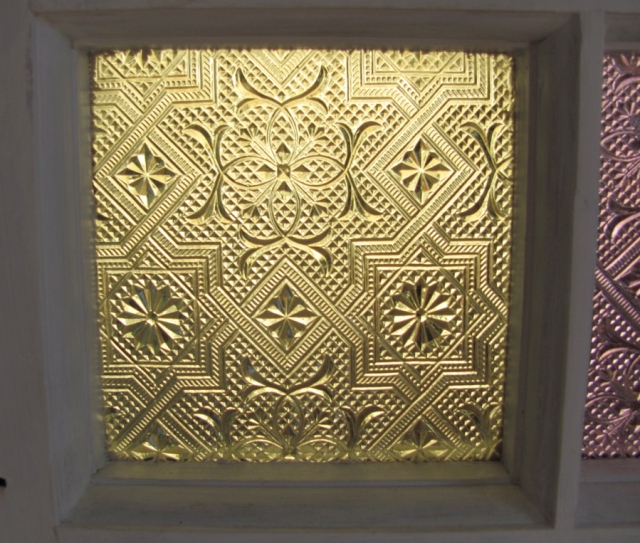 I was in a strange little place called Ohaupo  and I was calling in at ‘Leadlight Products (NZ) Ltd.  I thought there might be enforced chat about the Mighty ABs, or even some specific discussion about the underwear model’s groin injury and how it had plunged every one of us into an angst this side of Munch. However the young man who worked there was conscientious, modest and blissfully quiet. There was something about him of the seriousness of a medieval apprentice.

I obtained two pieces of ruby glass and a replacement side pane for the double doors. But I was also looking for some barley sugar coloured glass to add to the other coloured windows, (two of the other windows teamed red with this peculiar shade. We liked the eccentricity.) But the range of barley sugar orange glass was disappointing. It was either palest citrine or turgid hallucinatory go-girl orange.

I was now in Kingsland, at Sauvarins. Kingsland, long into its existence as a ‘cup venue’ stunk like a urinal and looked a little depressing. The once characterful village was all pimped out and slack as a tart after an epic night with the troops.

Anyway the lady behind the counter in Sauvarins (happily surrounded by more bird-dirt and mouth gargle colours) told me they no longer ‘did colour glass’. She kindly wrote the directions down for Sauvarins colour glass which, she told me emphatically, was a stand alone business no longer connected to the old Sauvarins.  I reflected how businesses in NZ had no longevity or even bothered to keep old stock in the sure knowledge that fashion revolves and everything is needed in the end.I also noticed how everywhere I went there was no business happening and the whole country, like countries all around the world, seemed to be slowing right down.

I found the coloured glass Sauvarins out at Onehunga – I was the only customer – but the very pleasant woman who worked there couldn’t help me either. All the colours seemed electric, unsympathetic and unambiguous. It was no go.

I don’t know. Sometimes I fear a conservatory made up of old Victorian glass windows is a 70s cliché. It may well be. But perhaps clichés have to be reinvented – reoccupied – changed so that they take on a whole new life. 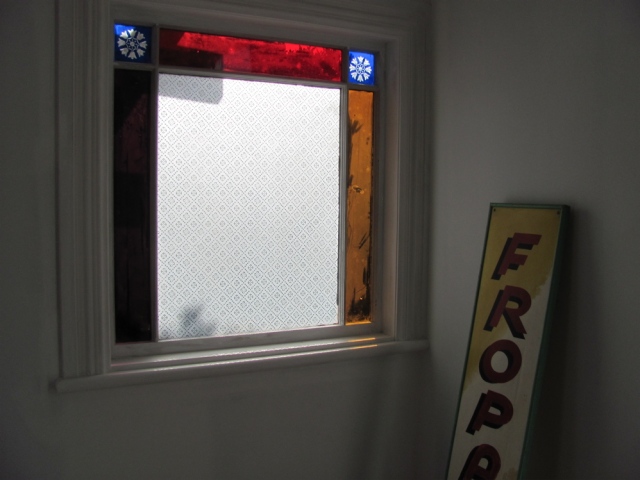 We might have avoided it by the use of cream painted wood. In the old days there was a lot of native wood usually left untreated so it had a kind of orange look to it. There might even be a smell of linseed oil. There was a heaviness to the conception, even a masculinity. Often in my mind’s eye I see these rooms as dark. (Possibly even dirty, if I am frank.)

We’ve gone – surprise – for the more Cecil Beaton-end of things – the light white conservatory much featured in his retro-Edwardian My Fair Lady. The idea is a kind of creamy whiteness and lightness offset by dazzling colour – with light coming in through different coloured glass.

In the end we decided not to go for the eccentricity of barley-sugar orange – especially as it was unprocurable. We’re getting another lot of ruby-red flat glass. I emailed the quiet young man at Ohaupo and already the ‘ruby red flat’ is winging its way to us.

1 Response to More Beaton than butch