I have, over the years, got into the habit of buying myself little tokens, (paintings, expensive books, nice watches), to mark a special occasion, especially those that come with a cheque attached – an advance or a nice award. This week I have extended this habit into one that marks those small occasions that come without cheques and in this case with not winning literary prizes.

The prize in question went to a well-deserving friend and so any associated melancholy was short-lived – intense enough only to drive me to my favourite Wellington antiquarian bookshop (Quilter’s) and to one of a near-by second-hand shop (Abel Traders).

Among the host of things that caught my eye (but not sufficiently to pick-up this time)  at Abel’s were – a framed photograph of an old steamer off Gravesend, a couple of nice Victorian plates in the Chinese manner, a painted fire screen, some lithographs of Scotsmen in traditional garb and small collection of Jasperware.

I may well have been able to resist the jasperware (I always have in the past) had it not been green. Jasperware, popular collectible of grandmothers, is a difficult area in which to collect because ninety-nine percent of what you see around you – is essentially valueless late twentieth century homeware – in disguise as something authentically Georgian/Victorian. In addition, most items you encounter are tiny – as is want to happen to items intended as ‘collectables.’ In the case of Wedgewood Jasperware this means an endless onslaught of pin dishes, ash-trays and commemorative plates. Green however is something that is always on our minds. It would be easy enough for every room in the house to end up green if we didn’t occasionally take stock of our plans and have a bit of a rethink. Having said that we’re planing another green room and are keen to get the colour right – and when it comes to greens and blues, Wedgwood tones are good starting point.

Amongst the items of offer was a small jug and two conical vases, one tiny the other of decent size. The larger one caught by eye – it had a pastoral scene involving heavily armed cherubs set amongst a couple of nicely articulated trees against a solidly turned body and seemed in good condition. Underneath a couple of scattered mark and impressed numbers – easily to make out Wedgwood and Made in England and the rest could wait. After a bit of indecision, knowing that either Peter or I knew anything at all about Jasperware he purchase (wholly reasonably priced) was made the item wrapped and flown home.

When it comes to collector’s books – I like the old ones – in this case Chats on Wedgwood (1924) by Harry Barnard. It’s one of a series be found in almost antiquarian bookseller – including Quilter’s. These old books are under illustrated and tend to tell you how to identify things that you’re more likely to find in the V&A than you are in the Sallies but they have a certain charm that you imagine you might get talking to an old antique dealer  – although old antique dealers seem in reality to be rather less conversational that you might imagine. 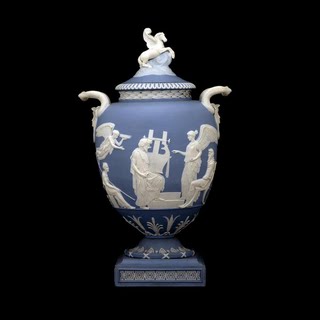 Long story short the basic key to understanding the marks on the bottom of Wedgwood Jasperware is that if the words are Wedgwood and England and they appear in different places on the bottom (not next to each other) then it’s probably older. If in the case of the vase I bought, the words are Wedgwood and Made in England, then it is twentieth century. Had I looked more closely at the additional miscellaneous marks underneath this would have been confirmed by a date – 1955.

Placed on a little biedermeier table of Peter’s, standing in the debris of what will be the new green room, I like the vase. It is nothing like the sample of green paint we’d pre-chosen for the room and so we will probably get the paint charts out once again and having noted the essential difference in marking between old and new jasperware – I shall adopt a new approach to any further purchases.

This entry was posted in inspiration. Bookmark the permalink.