Visitors often ask where I (and they might) get inspiration for rooms or décor moments. The question arises because too often when searching for decor ideas homeowners simply look at decorating magazines. The problem is compounded in that if you look only at the New Zealand magazines you end up in a downward spiral of neutral inoffensiveness and in pursuit of the vast emptiness currently favoured by New Zealanders or at least the nesting magazines. There is no better/worse way of following the herd than copying ideas from local magazines.

I don’t oppose décor magazines; I’ve contributed to many an issue over the years. I’m an enormous fan of World of Interiors, which I began buying as student when the cover price of $6.40 – meant going without some basic food group. Back then, I used to buy World of Interiors in order to look at post-modern follies and weird neo-baroque interiors by contemporary eccentric Englishers. Somehow I kept buying it through my modernist phase and these days I’m just pleased to settle back with a glass of wine and a story on a good Georgian cottage or the abandoned backrooms of a stately home.

The point is that World of Interiors draws on a pretty wide range of sources and therefore there is plenty to inspire you. Most importantly not of all of things they offer up are rooms and it occurs to me that I get as much from the book reviews and the paintings.

I mentioned the other week Gustave Caillebotte’s Le déjeune as an influence on my thinking about the use of darkness and dark colours in interiors.  It made me think about how often I turn to paintings as inspiration not so much for the detail and as for the mood and tone of an interior space. 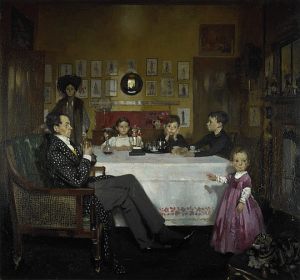 One painting I’ve long been fascinated by is William Orpen’s Bloomsbury Family (1907) a portrait of the painter William Nicholson and his wife Mabel, in the dining room of their Mecklenburg Square house in Fitzrovia-Bloomsbury. This painting usually gets a bad rap. Art historians use it to beat-up British painting up for not being French painting and social historians use it as a portrait of the iciness of Edwardian family life (as if it were a realist photograph and this were the average family). However Orpen is a wonderfully evocative painter whose works have real character and individuality and should you get to the Scottish National Gallery in Edinburgh go seek out Bloomsbury Family.

I first encountered Bloomsbury Family in Stephen Calloway’s Twentieth Century Decoration (1988), still one of the very best books on the subject.  Calloway revealed some interesting detail, particularly regarding another of Mabel’s interiors in the same house – ‘what must have been, for the time, an extraordinary scheme’ – a drawing-room with a Chinese dragon carpet in bright colours and a sofa covered in black satin – go Mabel!

The Nicholson’s dining room always stays with me as my archetypical successful yellow room. Yellow is such a difficult colour to pull off and most get it tragically wrong. In part because yellow rooms (painted with plastic paint) and flooded with Kiwi sunlight, almost always end up seeming harsh. Their reflective properties are deeply unflattering to their occupants whose skin looks jaundiced as a result.

The Nicholsons’ room on the other hand takes advantage of the use of darkness to transform what is yellow into gold by a process of dampening down the reverb so that the room and its contents glow. Nicholson arranged his walls with portrait of regency dandies in those little narrow black frames you so often encounter around old prints. Note also the convex mirror. Then he frocks-up in the same style, in imitation of what was by then the fashion of a hundred years earlier. This, and the fact that he dresses his youngest child to match the tablecloth, makes him my sort of guy. 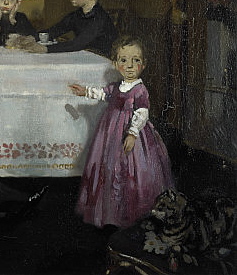 I haven’t yet tried to create something Orpen/Nicholson inspired and I’m running out of rooms in which to try. However we have managed another painting/room link in another part of the house but this time the inspiration was more subliminal.

Peter is a fan of the Biedermeier style. He has a lovely biedermeier sofa and an elegant wine table. I was introduced to the style through interpretations by designers including Robert Venturi and Michael Graves but was wowed by the originals when we stumbled across the exhibition Biedermeier: Art & Culture in the Bohemian Lands 1814-1848 while on a visit to Prague some years back.

Long story short, one of the enduring images of that period is  Man Reading by Lamplight (1814) by the German painter Georg Freidrich Kersting (1785-1847) – seen below.

Kersting was a friend of Caspar David Friedrich. The two are both early Germanic romantics –  back when German meant romantic. However, as Kersting’s Wikipedia entry suggests, his ‘most lasting works are his figures in interiors’ that ‘feel contemporary’ due to the situations they depict.’ A Kersting interior is one we’d like to occupy even now.

Peter was always going to fall for an image like this – it is Biedermeier in style, it depicts a writer and the room is green. When it came to decorating Peter’s study (designed as a bedroom and snatched from my grasp at the last-minute – but that’s another story) we didn’t reference the image at all. Yet the other day I caught a glimpse of Peter at work and at the same time caught a glimpse of Man Reading by Lamplight as if the two images were somehow overlaid in time. Although Peter had left the tableau in question, by the time I captured it in the convex mirror, the evocation remains. 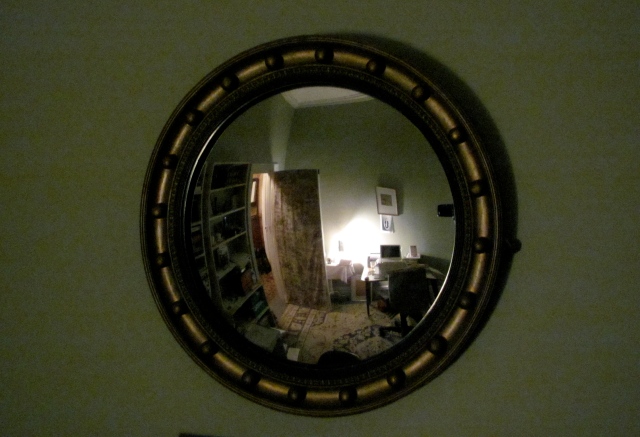 The whole point of this rambling posting is to answer the question where should we look for inspiration? My advice, look widely but know that paintings are a good place to start. Remember however that what we’re really looking for is tone and effect, an evocation of the mood or feeling you’d like to achieve, rather than an easy to put together step-by-step guide to achieving the contemporary room.

In the end, imagine the pleasure of sitting around with friends and unprompted (except perhaps by copious liquor), one of them says “this room is like being in a William Orpen, or a John Singer Sargent.’ It is a much better response than “didn’t I see this couch in the March issue of Urbis”? Admittedly it might require acquiring a whole new set of friends but you might come somewhere close – I am quite prepared to settle for “I like this room. It’s unusual. It’s nice.”

This entry was posted in art, inspiration. Bookmark the permalink.