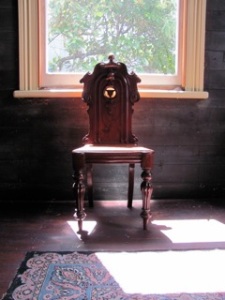 One of the things I like to do each year is to change the interiors we live in. This happens best in summer. The weather is warmer, lighter – behaviour becomes more casual.

So this summer we changed the look of the Studio.

Normally this is quite a heavily decorated room. Its main colours are the scarlet of the carpet and the enormous red drapes. But over the past few years our cats have made emergency stops at the curtains. A tip here is baking soda, which absorbs at least some of the horrible smell – cat piss being probably unique in the annals of retentive stinks.

Now we have three new kittens. One immediately recognized the curtains as an impromptu toilet stop. So, to use a good old-fashioned metaphor, … it seemed a good idea to kill two birds with one stone. 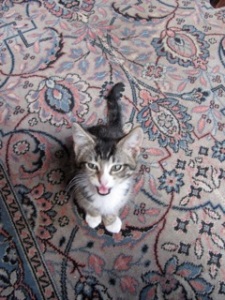 We got the ladder out and took down the red curtains. I’ll hand wash them in cold water over the summer. They’re Indian cotton and as the woman in Spotlight, (a fabric chain), told me: they’re not colourfast. Already over three summers the red has faded in the folds. But I don’t mind this.

Normally the curtains sheild the room and cast it into a kind of pleasurable gloom.

There is a studio skylight in the roof, which lights the whole room up at certain times of the day, so light isn’t a problem.

So we took down the curtains for summer. This immediately gave the room a kind of naked look.

In addition we took out the mahogany dining table and replaced it with a Kauri kitchen table of quite some presence. I had bought this in an auction, falling in love with its legs. (Leg-love.) They are deep black and chunky looking. We also took away most of the red upholstered furniture which was going into another room anyway.

We replaced it with a yellow couch, made of native timber but also painted black. (The black looks sort of congealed, you can just see some hints of the original wood in it.) It’s a colonial piece. Out in the shed we had a huge mock Oriental carpet. We’d bought this when a vast antique store closed down, following the death of the owner. His son came to town and did a very clever thing. He did an auction ‘without reserves’. People went mad and paid prices way over what the articles had been priced at retail, when they sat in the shop unloved.

We didn’t buy a thing.

The following week they sold off ‘the rubbish’. This included three vast shabby old carpet squares which had been used to soften the concrete floors. All were Edwardian. I bought all three at about $70 each. The one we brought into use was a kind of mauve-pink Persian-style carpet.

So suddenly the whole room had changed. It became a room with yellow upholstery, black wood, bare wood, and this vast strangely coloured carpet. No drapes on the side windows.

It feels quite different. Lighter.

The room is consciously theatrical. 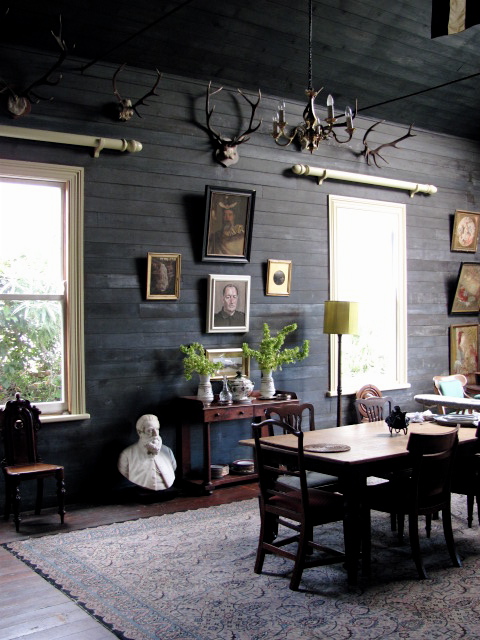 1 Response to A Summer Look